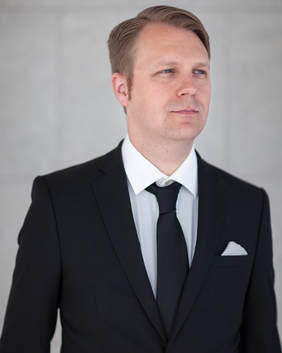 Ben A. Spalding is one of the most exciting professional choral conductors of his generation and has established himself as an exemplary conductor, creative programmer, composer, arranger, keyboard artist, and arts entrepreneur whose skills are increasingly in demand. Hailed for creating “exceptional sonic painting" (Kansas City Star) and “fresh and fiery, grand and grave” (Kansas City Public Radio) concert programs, Spalding is the Founder and Artistic Director of Kansas City’s Spire Chamber Ensemble and Baroque Orchestra, which has quickly gained a national reputation for excellence in choral performances receiving rave reviews for his work with the music of contemporary American composers as well as historically-informed interpretations of Baroque and Classical repertoire. He consistently works with the best choral artists and early music specialists in North America and was recently honored to lead Spire in riveting featured performances at the 2019 National American Choral Directors Convention and 2018 American Guild of Organists National Convention.

A champion of new music, Spalding has a deep commitment to honoring the talents and contributions of contemporary composers by being a catalyst for the creation of new compositions. He has recently directed commissioning projects with Spire giving world-premiere performances of new works by Jake Runestad, Zachary Wadsworth, John Muehleisen, and Sir James MacMillan.

Spalding is also active as a composer, regularly accepting commissions and is known for his creative keyboard and vocal improvisations. His oratorio The Great War Requiem was featured for the opening performance at the 2018 National American Guild of Organists Convention, commissioned in honor of the 100th anniversary of the end of World War I. He recently recorded the Frank Martin Mass for Double Choir along with his original works, and the music Jake Runestad, Stephen Paulus, and Sir John Tavener to acclaimed success.

He has a particular interest in promoting the music of Johann Sebastian Bach who was the consummate master of polyphony or ‘many voices’ — and this serves as the catalyst for all his musical explorations. He is an established early music leader with a thorough knowledge of performance practices for both modern and period instruments. He recently conducted and produced half of Bach’s sacred cantatas (approximately 100) in one of the first Midwest performance series of its kind featuring the Trinity Chamber Artists, which he also founded. His multiple performances of Bach’s choral-orchestral masterworks, including the Easter Oratorio, B-minor Mass, St. Matthew, and St. John Passions have been lauded for scrupulous attention to detail.

Spalding received undergraduate degrees in voice and piano from Emporia State University and a Master's Degrees in choral conducting with additional studies in composition from Rowan University. He was a student of renowned conductor and composer Z. Randall Stroope and has also studied conducting and church music with the late Sir David Willcocks in Cambridge. In addition to his work with Spire Chamber Ensemble, Spalding is Director of Music and the Arts at Trinity Lutheran Church in Mission, KS, where he has built one of the most prestigious concert series and arts programs in the region.