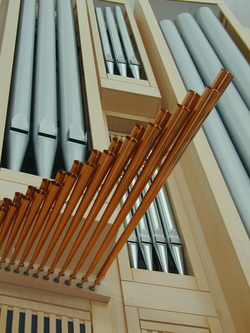 The Community of Christ Temple is home to a remarkable organ built by the Canadian firm of Casavant Frères Limitée, of St.-Hyacinthe, Quebec. Built in 1992 and installed in the early months of 1993, the Casavant organ contains four manuals, 60 stops, 102 ranks, and is the result of more than 20,000 hours of planning and building. The 5,685 pipes are distributed on three levels behind the façade in an organ case that is fifty feet high, forty feet wide, and eight feet deep. The organ’s many pipes are made of a variety of materials, including polished tin, lacquered zinc, a mixture of tin and lead that forms "spotted metal," and polished copper, used for the Trompette en chamade, which extends horizontally from the case.

Jean-Louis Coignet, Tonal Director of Casavant Frères and Organ Expert to the city of Paris, France, designed the instrument, which combines classical French principles with modern technology. The organ utilizes mechanical action for the Grand Orgue, Positif, and Récit divisions, and electropneumatic action for the fourth keyboard, the Résonance. The organ’s Résonance division is most unusual in the United States and takes its inspiration from the work of an early French monk organ builder, Brother Isnard, who built the first such division in St. Maximan, France, in 1772. The Temple Résonance expands selected pedal stops to manual compass and adds great power and complexity to the organ’s ensemble.

As with the Auditorium organ, the foundation of the Temple organ is built upon the 32’ Principal. The longest pipe in this rank, speaking at only 16 cycles per second and standing nearly 40’ tall, may be seen at the extreme right in the organ’s façade. The smallest pipe has a speaking length of only ¼ inch.

The organ’s nomenclature is predominately French in recognition of the instrument’s basic tonal orientation. Although the organ boasts a variety of classical stops, it is a decidedly Romantic organ whose sound envelops the listener.

The Temple is a spectacular venue for the organ, for music, and for worship. The organ’s façade was designed by Jean-Claude Gauthier to be purposefully understated so that it might contribute to the serenity of the Temple interior. The Temple sanctuary, which accommodates about 1,600 people, has an internal volume of one million cubic feet. The room’s shape and its spiral, which ascends to 195 feet above the floor, contribute to an extraordinary acoustic with four seconds’ reverberation, providing bloom and grandeur to the organ tone and music, and drama to the spoken word.

The Casavant organ is a fitting complement to the Auditorium organ. "Without question," wrote former Kansas City Star music critic Scott Cantrell, "it is one of the most glorious organs in North America."